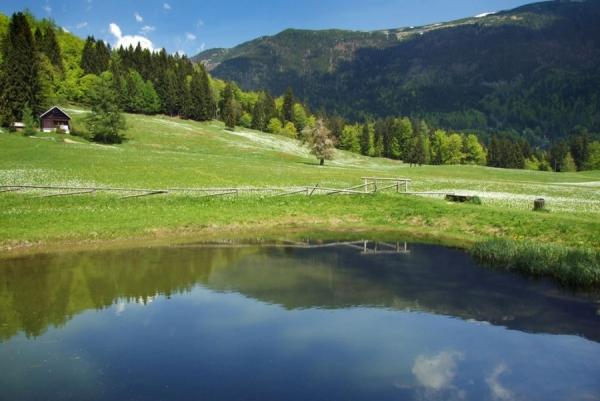 Zois' Park in the Karavanke is full of traces of ancient life. Petrified flora and fauna, cultural heritage of the place, spruce tree forests and forest learning path, emerald green lake, Karl Zois' botanical garden, the proximity of mountain paths and many other things ensure the visitor active and interesting spending of free time. Getting to know petrified objects, animals and plants which lived millions of years ago is interesting not only for experts bust also for young explorers, exciting their imagination when they find fossils of tracheophyte, horsetail, bryozoans, sea lilies, urchins, shells and snails. Fossils, discovered some decades ago, have been called slovenicus, jesenicensis and savensis, which bears witness to systematic geological research in this part of the Karavanke. More than two hundred years ago brother of better known Baron Žiga Zois, Karel Zois, found a yellow flowering pansy here. He sent it to a friend in Klagenfurt, who drew it and called it Zois' bellflower. It can be found only on the Karavanke slopes, most commonly on the slopes of Belščica and Stol. And it is only in this part of the Karavanke that another yellow flower grows, also discovered by Karel Zois. It is Carniolan ragwort, described by botanists on the basis of Zois' samples and named after Carniola.