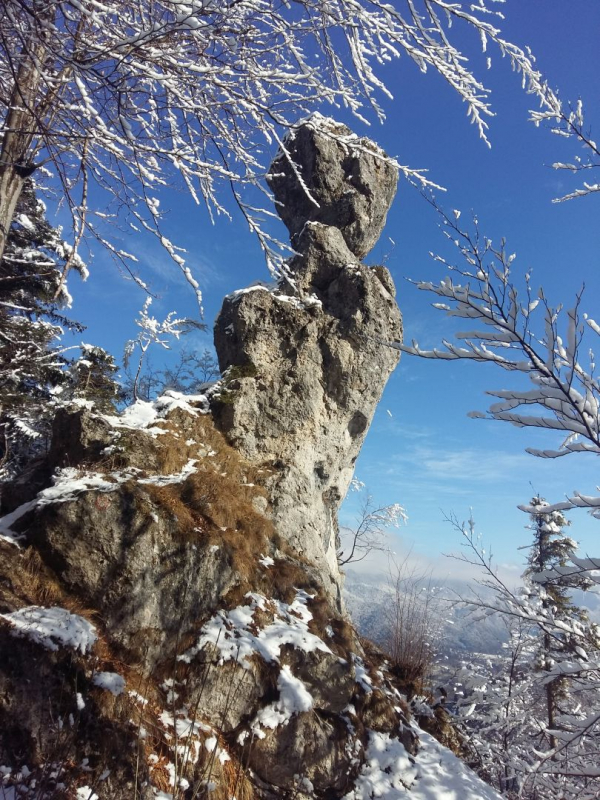 A solitary rock formation that rises above Kočna and Poljane, standing 4 m high towards the slope and 8 m towards the valley. It resulted from the weathering of rocks of various degrees of hardness that stand out as protruding towers, horns or buttes. Poljanska baba is the remains of the thickest layer of Anisian dolomite. In autumn 1995, a large part of its head broke off. This was caused by frost that had entered cracks, which had also been enlarged by the roots of a pine tree that grew at the top for many years.

In the past, when trying to understand the creation of solitary buttes, people turned to supernatural powers. Depending on their shape people named them “baba”, “dedec”, “možic”, “zob” or “igla” and “turn”. The most famous tale of Poljanska baba was written in Ljubljanski zvon in 1879 by Dr. Matevž Tonejc.

»They were hunting one day in autumn, my grandmother told me, on St. Michael's day, and farmers had to spur on the beast with the hounds they were given by the gentry. The hunters were positioned around the woods and well-protected so they needed not fear any beasts. The farmers did the chasing. The lord’s daughter was also hunting; she stood up there where she still stands today. Standing on the rock she saw a wild beast grab an already wounded old man, a drover, and killed him. She could have saved him from dying, but the fight in which the old man had to pass, was so much to her liking that she refused to help and even the servant, who was standing next to the young woman with a weapon, was not allowed to help him. In an instant, the woman turned to rock as this is what her heart was made of. She continues to stand there today and will stand there until her saviour is born. But before that happens, all spruce trees in Mežakla will be cut down nine times and nine times other ones will grow. The largest among them will have nine tops and the seed of the middle one will self-seed. From the seed a spruce will grow above the Sava River, from which the wood for a crib will be cut, the crib of nine sons from one mother who will not have a sister. The youngest among the sons will save the rock-hard, petrified daughter.« dr. Matevž Tonejc