Dobršnik cut its stream into the southern slopes of Hruščanski vrh (1776 m) in the western Karavanke mountains, almost exactly from north to south. Its relatively high drop in a short distance created a picturesque gorge that boasts the largest group of waterfalls in the Karavanke mountains.

In its upper part, the narrow one-kilometre gorge is made of nicely visible horizontal layers of mostly dolomite from the Middle Triassic, sometimes combined with layers of limestone, and in the lower parts also with marl and marly limestone from the same period. In the bottom of the gorge, you can find boulders that have broken from the Permian rocks above it. The Dobršnik stream flows into the Sava River near the village Hrušica. 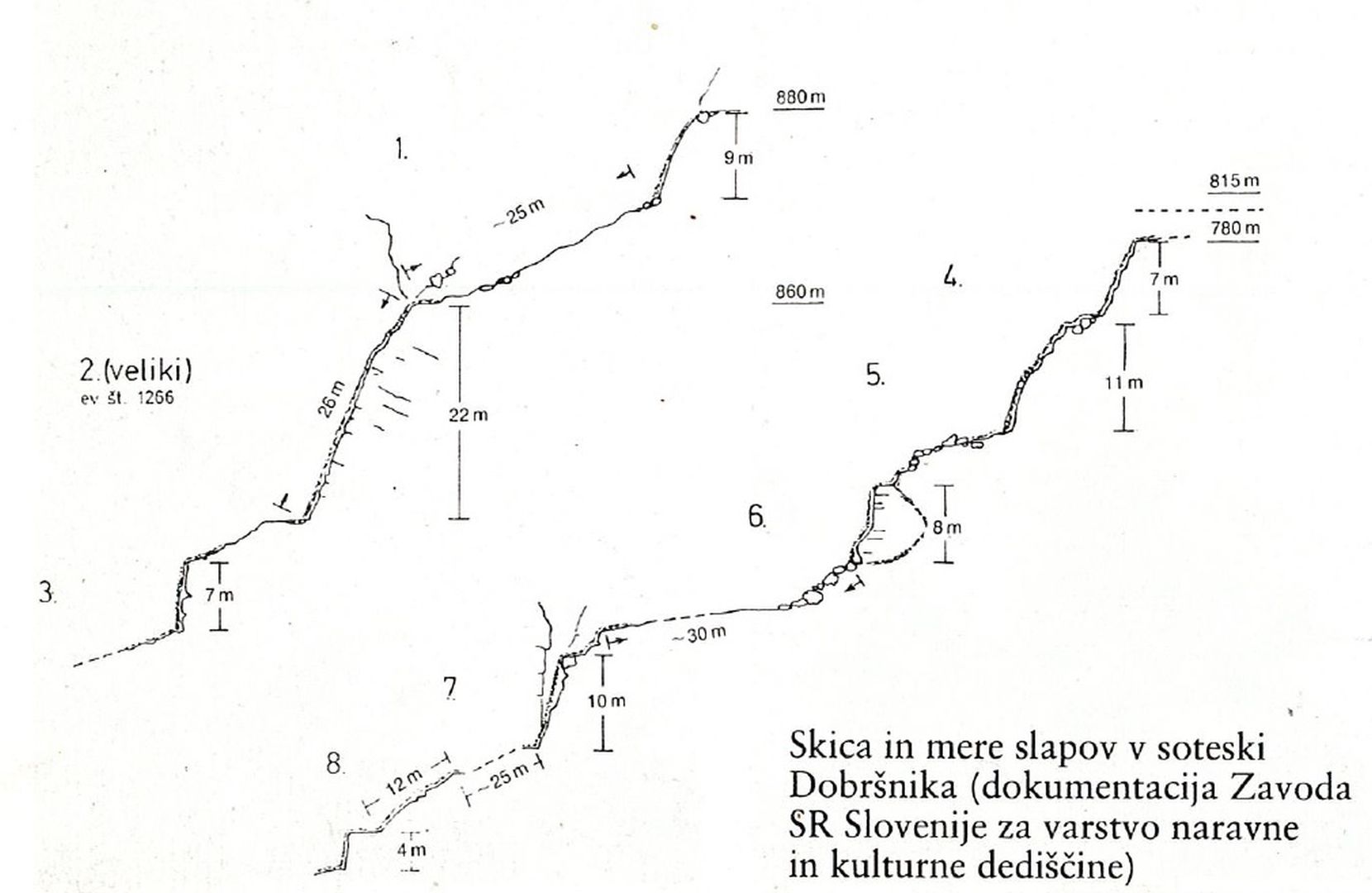 There are eight waterfalls in the gorge, with the tallest one spanning 22 m. (Source: 100 naravnih znamenitosti Slovenije, P. Skoberne, 1988) 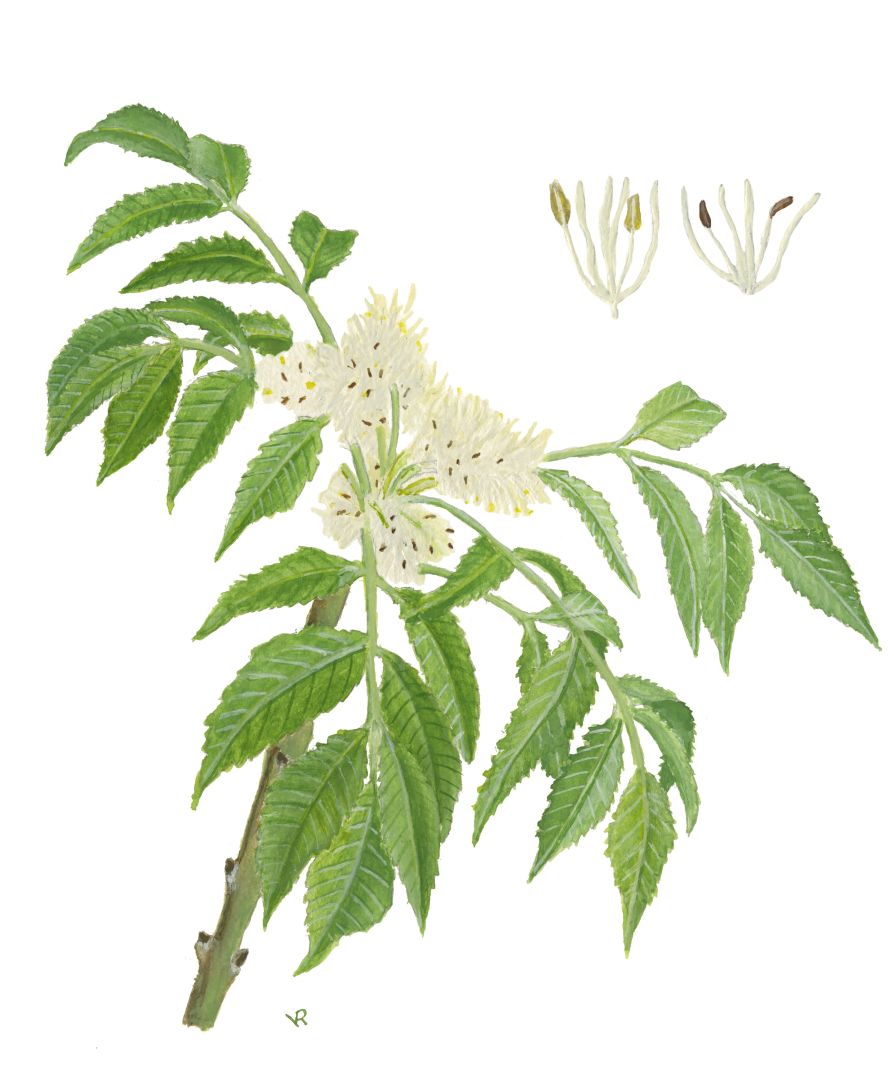 The precipitous western slopes of the gorge are very crumbly, while the eastern slopes are also steep but wooded. Beech forest dominates in the upper reaches, and in the warmer lower parts you can also find the hop hornbeam (Ostrya carpinifolia) and the flowering ash (Fraxinus ornus), which is pictured above. (Drawing by: Dr Vlado Ravnik)

The gorge is cut from what was roughly the top of a former glacier. The steeply falling water cut into the ledge left behind by the glacier. The sketches below illustrate how glacial erosion changes the landscape, showing the surface (1) before, (2) during and (3) after the ice age. This is how the Upper Sava Valley was created. When the glacier withdrew, the Dobršnik Gorge was cut into its northern wall. 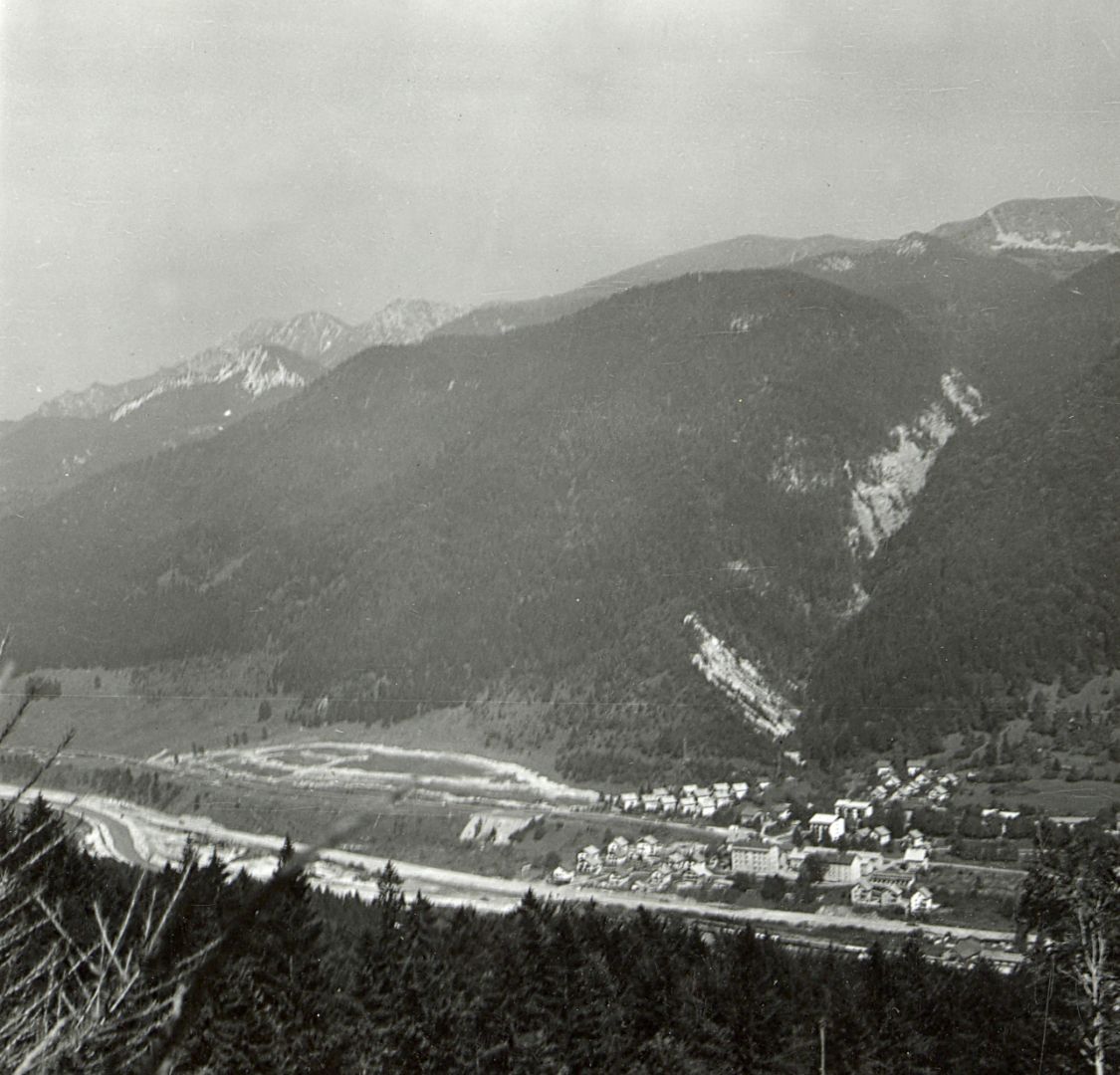 In the upper part of the gorge, the rock layers contain many fossils. The dark grey limestone hides light-coloured plates of sea lilies and Costatoria costata shells. Some pieces of rock are full of snail fossils of the characteristic species Natiria costata (pictured left below). In the softer marl layers, you can still see traces of tunnels dug by the prehistoric annelids (Rhizocorallium striatum)—the predecessors of worms, which would dig through the soft marly mud (pictured right below). All these fossils tell us the material that became the rock layers seen here had settled in the aquatic environment of the Tethys Ocean some 240 million years ago. 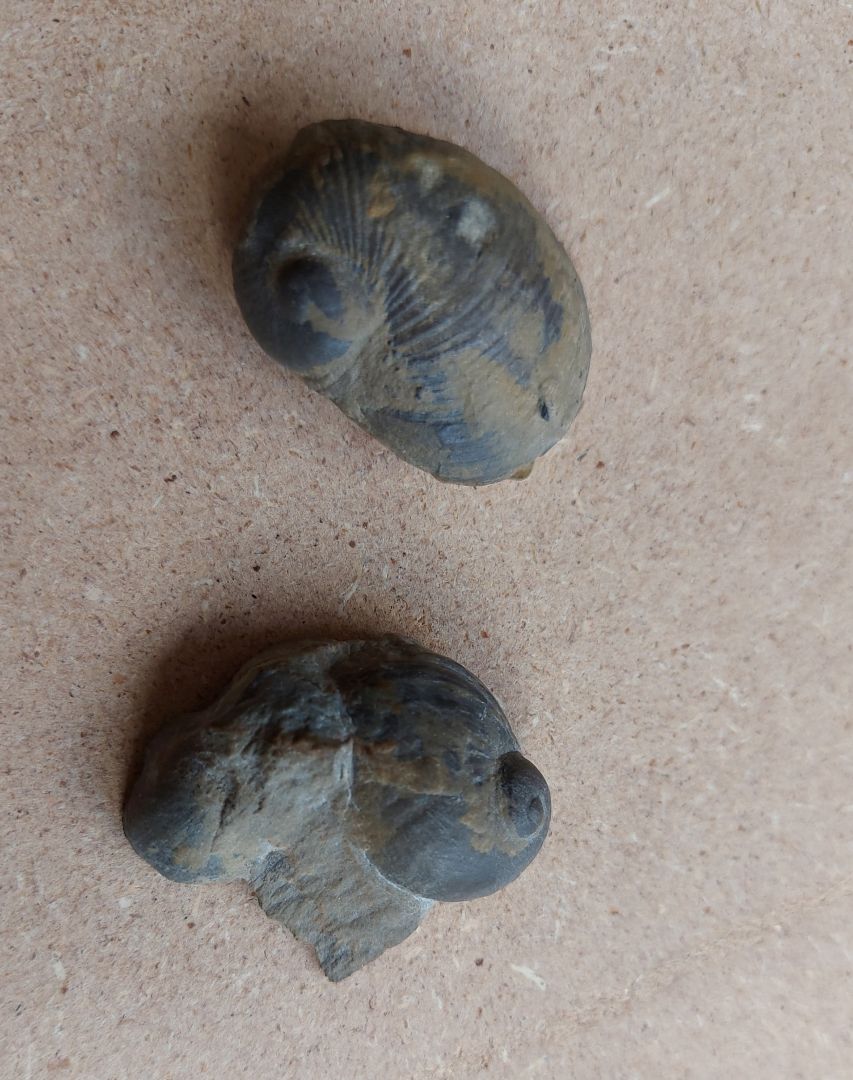 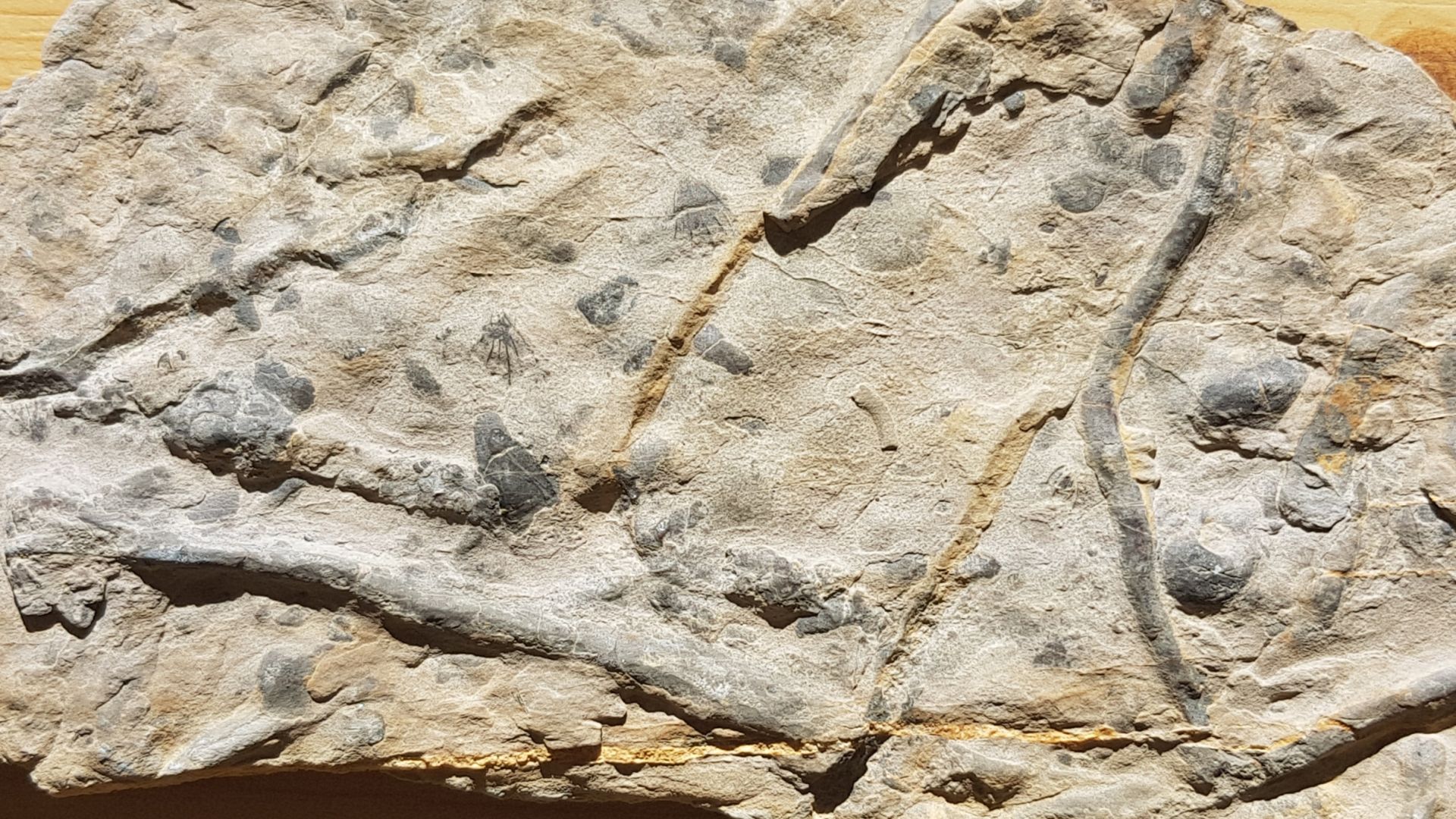 A tourist trail through the gorge was arranged in 1910. The alpine gazette Planinski vestnik described it in 1911 as follows:

“With a celebration as is becoming, the Dovršnik Gorge was opened just above the village Hrušica near Jesenice. In terms of the amount of water, this gorge cannot be put side by side with the Vintgar Gorge. Yet, it can surely compete with many a beauty of Gorenjska and is worth everyone’s visit. We would especially recommend visiting it after rain. The magnificent surroundings with the fresh mountain air and peace in this gorge have a most beneficial effect on a hiker’s nerves.” The newspaper Glas wrote in 1980: “Already before the First World War, the tourists of old were highly enthusiastic about the romantic beauty of the narrow valley of Doberšnik. So much that they made safe trails along the entire gorge and to all the waterfalls, cutting steps into the rocks and setting up ladders and footbridges where there was no other possibility.” 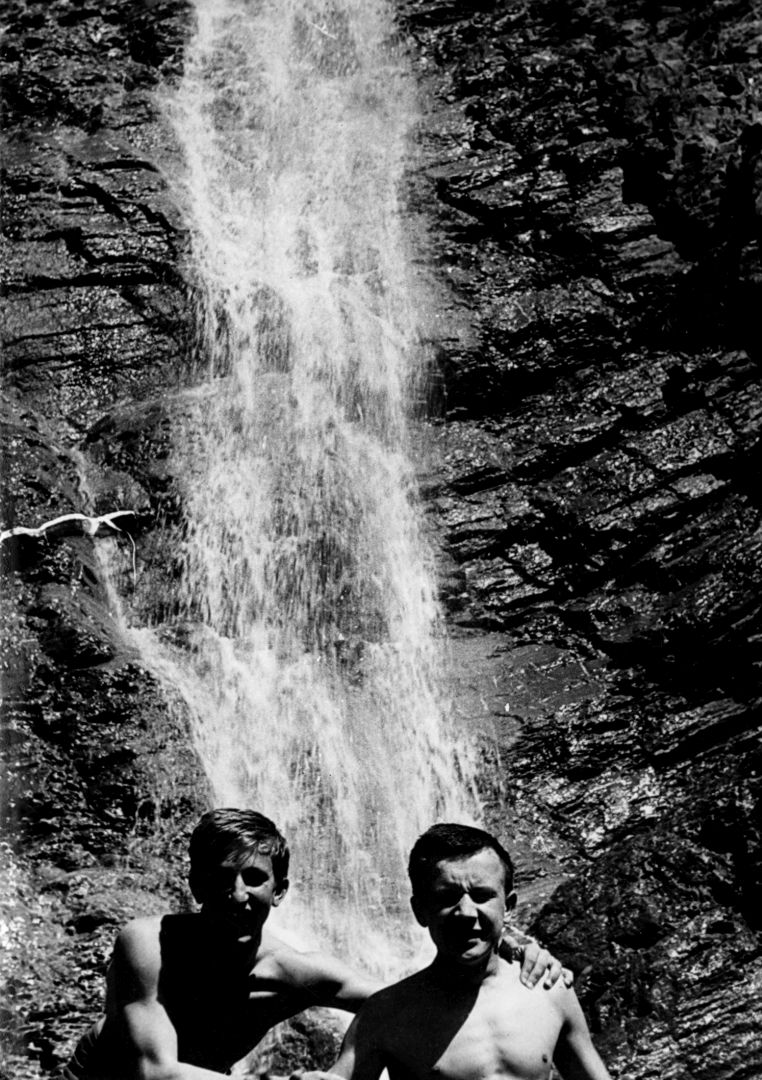 “We shouldn’t have done many things we did as young lads because they were dangerous. But you weren’t a real man in Hrušica if you hadn’t taken the Franciscan trail along Dobršnik’s waterfalls when water was abundant.”